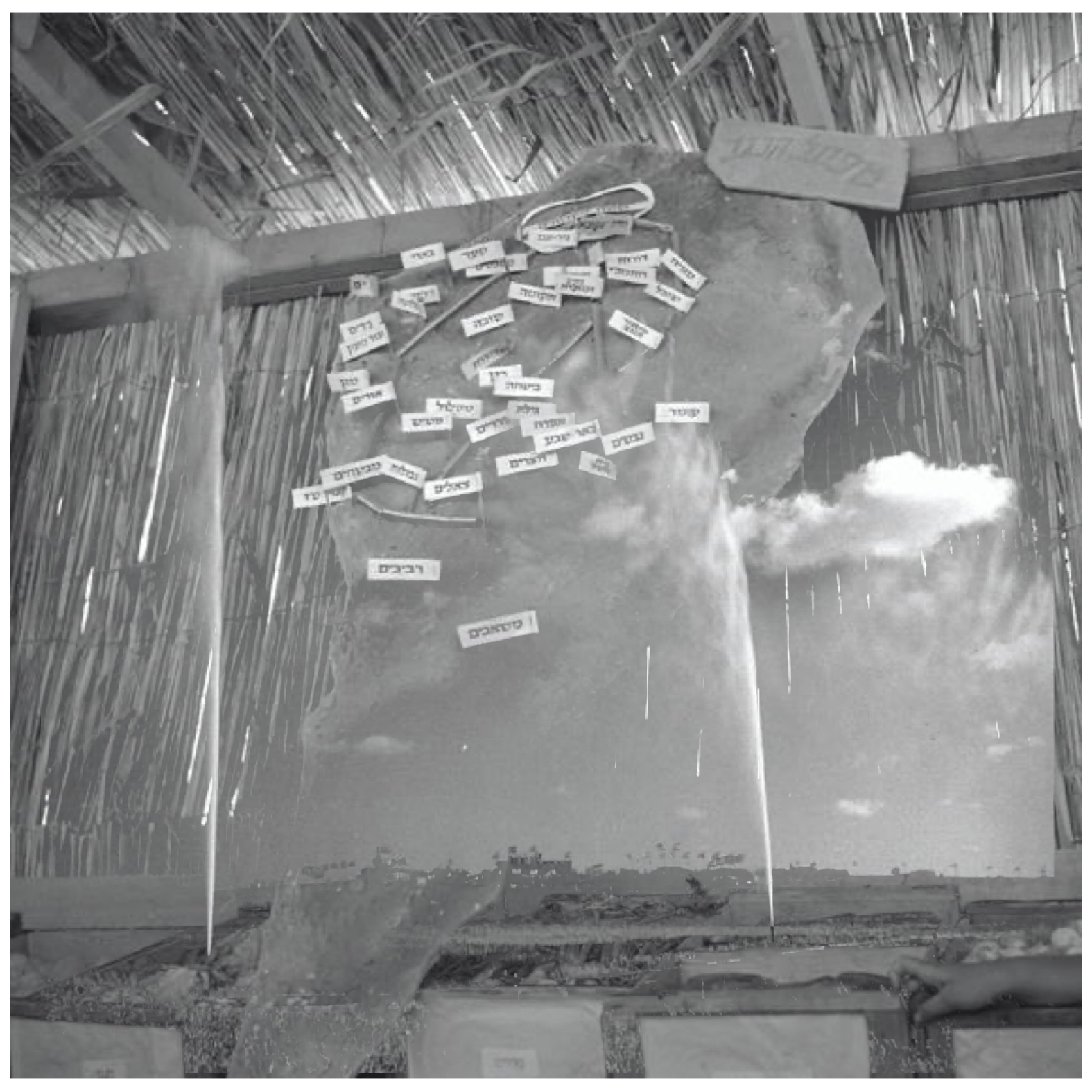 Desert Futures is a long term research and design project aims to spatialize and make visible the tensions between political systems and natural ecologies, as well as human attempts to colonize and commodify the desert by dividing, fortifying, mining, extracting, militarizing, polluting, and foresting it. The first case study for this project is the desert in the south of present-day Israel, called the Naqab in Arabic and the Negev in Hebrew.

The Naqab/Negev is part of the Southern Eurasia region, which, in the organization One Earth’s framing, includes the Red Sea, Arabian Deserts, & Salt Marshes bioregion. The desert is home to 1,330,600 people, small populations of Arabian leopards, caracals, striped hyenas, Arabian wolves, golden jackals, and marbled polecats, as well as 1,000–1,500 mountain and dorcas gazelle, 350–500 Nubian ibex, and some shrew and Kleinmann’s tortoises. Several animals were reintroduced after their extinction in the wild, such as the Arabian oryx and the Persian fallow deer. The western edge of the Naqab/Negev, which stretches from Gaza in the north to the Sinai Peninsula in the south and abuts the Mediterranean Sea, is a biodiversity hotspot.

Further inland, the region’s harsh desert climate, water scarcity, and barren landscapes have long made human and other species’ survival challenging. Dependent on their deep knowledge of the desert’s climate and ecologies, however, nomadic cultures have been nonetheless able to inhabit the area for millennia, surviving by way of frequent and rhythmic migration and by the operation of important trade routes between the various cultures that border the desert. The inhabitants of the Naqab/Negev, the Sinai Peninsula, and the Arabian and Sahara Deserts moved all sorts of resources from east to west and back, connecting the Maghreb with the Arabian Peninsula, linking Africa with Europe and Asia, and thereby co-pollinating the exchange of knowledge and culture across regions. To this day, some of these peoples’ migratory flows transcend the logic of the nation-state and its fixed borders.

Still, migration in the Naqab/Negev has been increasingly severely limited by border-control enforcement. For the centuries leading up to 1948, the desert had been colonized by the Ottoman and British empires. Since then, it has been under Israeli sovereignty, leaving it today delineated by 200 kilometers of highly surveilled international borders, fences, and walls separating Israel from Egypt and the Gaza Strip to the west and from Jordan to the east.

After the establishment of Israel, the Naqab/Negev, which covers about 60 percent of the country’s territory, became a space of national fixation and inquiry—a space of experimentation, where Jewish national resurrection and modernity converged. Following calls to “make the desert bloom” (a metaphor for the establishment of Israel), scientists, military and political leaders, artists, and architects traveled south to the desert to experiment with its settlement and domestication—conquering, controlling, and transitioning its ecology to make it simultaneously more green and fertile, more industrialized, mined, and settled, and, most significantly, less Arab. Colonizing the desert was a prominent goal of the Zionist mission.

After retiring with his wife to a small wooden hut in Kibbutz Sde Boker in the Naqab/Negev, the first prime minister of Israel, David Ben-Gurion, noted in his memoir that “the Negev has given me time and perspective to look back on Israel’s modern redemption.” He continued:

The Negev’s very barrenness is a blessing in disguise. What treasures do the sands conceal? We must focus attention the systematic investigation of forces, known or latent, that can make the Negev thrive. For without the settlement of this region, we simply don’t have the “elbow room”—a term used by the American pioneer Daniel Boone to describe his own need to push ever westward into that continent’s unexplored wilderness—to make Israel economically independent and military secure … we can attain it … by moving a good segment of the population here and cultivating the land.

About Sde Boker Ben-Gurion wrote: “We have created this green spot in accordance with the Biblical injunction that man must comport himself in the spirit of his maker who created the Earth. The desert is a reproach to mankind. It is criminal waste in a world that cannot feed its population.” He then added, “I am against big cities. They bring out the worst in men.”

Succeeding national leaders and military generals, such as Moshe Dayan and Ariel Sharon, were also enchanted by the desert, and led the Israeli armed forces to annex large swaths of the desert from Egypt in the interest of Israeli settlement in the area. From the establishment of Israel in 1948 on, the reach of the Naqab/Negev continued to fluctuate, expanding over the Sinai Peninsula and withdrawing back to what now constitutes the official border of the country. Like Ben-Gurion, who wrote that “anyone who believes you can’t change history has never tried to write his memoirs,” Dayan was obsessed with history. He spent his free time in archaeological digs, recovering, seizing, and reinterpreting antiquity and thus conquering both land and its history. Sharon, meanwhile, built himself a ranch in the Negev and conceived several masterplans to colonize the landscape by introducing, among other of his ideas, a series of national parks, agricultural development strategies, and individual settlement schemes.

Despite Ben-Gurion’s evocation of “unexplored wilderness,” these three Israeli leaders did not overlook the Naqab/Negev’s local indigenous population, the Bedouins, who had lived in this region for millennia, in attaching the desert to the core of the project of Zionism. Years before the Israeli state was established, in the 1930s, Ben Gurion already declared: “Negev land is reserved for Jewish citizens whenever and wherever they want. We must expel the Arabs and take their place.” Several decades later, Dayan changed tack:

We should transform the Bedouins into an urban proletariat—in industry, services, construction, and agriculture. Eighty-eight percent of the Israeli population are not farmers; let the Bedouins be like them…. Indeed, this will be a radical move which means that the Bedouin would not live on his land with his herds, but would become an urban person who comes home in the afternoon and puts his slippers on. His children would be accustomed to a father who wears trousers, does not carry a Shabaria [a traditional Bedouin knife], and does not search for vermin in public. This would be a revolution, but it may be fixed within two generations. Without coercion but with government direction, this phenomenon of the Bedouins will disappear.

In the 1970s, while serving as Israel’s Minister of Agriculture, Sharon declared much of the Negev a nature reserve, thereby restricting the access of Bedouin herders to grazing fields. His newly established Green Patrol would police the reserves, going on to quickly displace ninety Bedouin localities and effectively cut Bedouin herds by a third, transforming the ecology of the desert. Around the same time, the government launched the construction of the first seven new Arab towns to be erected since 1948. (see Maps) These urban townships, or concentration sites, were designed to receive the populations of those many villages that the state aimed to entirely uproot from their land. Villagers who refused to move into these townships still struggle to keep their homes and to survive against continuous state violence. To this day, these villages go unrecognized by the state. Inhabitants are denied access to grazing rights and basic services; their homes are under constant threat of demolition. Those thousands of Bedouins that did move into the newly planned concentration townships complain about the quality of built space and regret their decisions as access to services such as water, electricity, roads, sewage or labor remains a struggle. Jewish settlements, meanwhile, have continued to be planed and built across the Naqab/Negev. Regardless of these settlements’ isolated locations, they are categorically well connected to state services such as water, sewage, and electricity grids.

In short, the desert landscape is highly political and highly politicized. Its capture and exclusive domination by the nation-state stand in sharp contrast to those very natural and cultural connections that once formed and composed the active, living ecology of the desert. But the trend toward colonization of the landscape is intensifying across the world. As global challenges mount—from the climate emergency to the depletion of resources to mass extinction and mass migrations—deserts worldwide continue to be mined, extracted, polluted, and forested at an unprecedented pace.

The World Atlas for Desertification predicts that by 2050, 90 percent of Earth’s land will be degraded due to human actions, rendering many more places across the world uninhabitable and expanding desert regions and the precarity of life within them. Desertification processes exacerbate water scarcity, rising temperatures, and mass migration. Current systems of governance must adapt to this new reality and steer away from policies of isolation and violence. In this time of crisis, past, present, and future actions converge. It is only by understanding how processes of colonization contributed to the destruction of life that we can begin restoring our relationship with each other and with the planet.